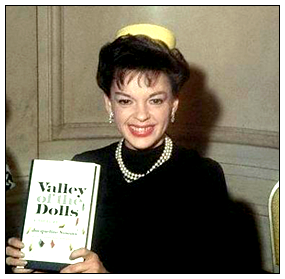 One of the classic Judy-Tragic-Career tales contains two of my favourite obsessions – Judy Garland and Valley of the Dolls.

Judy’s casting announcement for Valley raised eyebrows: the character of Neely O’Hara is a thinly disguised ‘Garland type’, bursting with talent but worked to the bone and gone to pills and liquor. But of course, Judy was too old by this time to play her ingénue doppelganger. Garland was to be Helen Lawson, a terrifying Broadway powerhouse based on Ethel Merman. Her casting as Lawson seemed against type for Judy and, for that reason amongst many, was a deeply thrilling idea. She never really played the monster, although the possibility of what might have been – and the depth she might have given the role – can be glimpsed in the brittle bite and guts of the hospital scene from I Could Go On Singing.

There was a more obvious casting for Helen Lawson, an actress you can totally see in the role and who wanted it very badly: Miss Bette Davis. Even if she did excitedly declare to Johnny Carson that she’d read this ‘wonderful book called Valley of the Moon!’

But for Garland (and Bette), Helen Lawson was to be The Role That Got Away and one that Judy fans of my ilk – and fans of Valley – mourn to this day. Oh what might have been! Another Judy film! And VALLEY OF THE DOLLS! 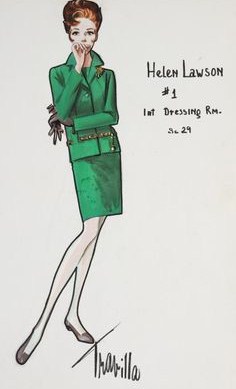 The announcement of the casting was captured in a press conference, where Judy sits besides Valley author Jacqueline Susann. Jackie was said to have been something of an obsessive stalker of women stars she took a shine to, including Judy and Ethel.

By this point, of course, rumours of Judy’s drug dependence and overdoses were already part of her legend and one bolshy journalist sneaks in a roundabout poke at this when he says, ‘The book deals with pills to some extent. Have you found that prevalent around showbusiness people?’

Ever the sharp shooter, Judy fires back, ‘Well, I find it prevalent around newspaper people’.

The only other bit of Judy/Valley related footage that exists is not from the movie itself, alas, but is left to us in the form of these glorious hair, makeup and costume tests where Judy awkwardly jokes with the crew as they ask her to pose this way and that.

‘Can you turn around?’

‘Without a cigarette and a blindfold?’ Judy hams

At one point Judy bursts into a fit of nervous laughter, possibly a result of the coldness of the process (it’s always surprising and jarring to see a superstar doing something so mundane). ‘You’ll pardon me, but I do get the giggles’ she explains.

The somewhat oversized Travilla creations (for once they seem to be trying to conceal her frail frame rather than hide any bulk) are colourful, classy and stunning; but they look wrong on Judes. Even the long wiggy ‘fall’ looks too big. Strangely, they seem much more suited to the actress who would eventually play Helen Lawson in the final movie when Judy was ‘removed’. The pant suit, in particular, looks PERFECT on the butch Hayward/Lawson as she smokes a cigarette and barks her lines with a hard, take-no-prisoners delivery.

Judy’s version of that bespangled copper pant suit was infamously ‘stolen’ by Garland when she left the production. Another less scandalous version of the story, as told by the designer Billy Travilla himself, has him gifting it to her as compensation for the lost role. Judy would wear the suit throughout her ‘concert years’.

But this test footage and a couple of stills are all we have of Judy Garland as Helen Lawson in Valley of the Dolls. For, although she did start shooting (Helen’s introductory scene in the dressing room, balling out poor Anne as she delivers a contract), Judy didn’t last long on the production. She was fired for tardiness, a sadly familiar Judy-Tragic-Career tale.

To see Judy as Helen playing against Patty Duke as Neely would have been fascinating. But this topsy-turvy casting world, where we see Judy playing opposite a character that is basically her, wouldn’t have been a first. In A Star is Born she is playing a role that is basically all of her lovers, husbands, children and assistants put together. ‘How do you live out the DAYS? How…’ Judy was always more Norman Maine than Esther Blodgett.

One thought on “Pardon me but I do get the giggles: Judy Garland in the Valley of the Dolls”