Exploring queer and camp ideas about Judy Garland through film isn’t a new idea for me. In fact, I did exactly that almost 20 years ago when I was at film school. For my graduation film, Rainbow Kiss (1997), I pitched an idea that drew from, and combined, my deep love of Classic Hollywood, fading glamour, star biography, vampires and Hammer Horror. You know the urban myth that certain stars haven’t really died, but their demise has been faked so that they can disappear? It’s such a strong – absurd, compelling – trope, and it fitted with my Hammer tribute perfectly. What happens to the Great Addictive Personalities when they die? Why, they become vampires, of course. I chose two of my favourite stars to be my lady vamps – Judy and Marilyn. And who’s the most famous of the didn’t-really-die stars? Elvis has a cameo in Rainbow Kiss. 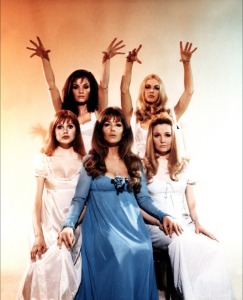 My favourite Hammer films are the lesbian vampire ones penned by the late, great Tudor Gates. The movie-scribe happened to have once been a tenant of my ex-boss Christina Smith. When I worked for her at Neal Street East in Covent Garden, I had the pleasure of meeting Mr Gates but was too shy to tell him I was a fan of his work. To this day I wish I had. He wrote a lesbian vampire trilogy for Hammer – The Vampire Lovers (1970), Lust For A Vampire (1971) and Twins Of Evil (1971). I don’t think much of the last one, but Lovers and Lust are two of my absolutely favourite films ever. For some reason – unknown to me now – I didn’t throw in any lez elements in my tribute (silly me – both MM and Judy had lady-enounters). What I love most about these Hammer films is that women are the powerful, seductive vampires. In Lovers the main vampire – Carmilla, played by the delectable Ingrid Pitt – is the head vampire. She uses a couple of blokes, sure, but she really just wants the ladies and is the main vamp with all the power. Alas, in Lust For A Vampire there is a Poor Man’s Christopher Lee male vampire controlling vampiress Mircalla. But he’s hardly in it and she mainly goes after the ladies too. In both films it’s about the female vamp’s seduction of women. Ladies’ sexuality is the main focus of bloodsucky attention. By the way, you may have noticed that Carmilla and Mircalla are anagrams of each other. This is because these films are based on Sheridan Le Fanu’s reincarnation lesbian vampire tale, one that predated Bram Stoker’s Dracula by 26 years. The first gothic vamps were queer women.

What I took from these films is the idea of female sexuality being transformative and powerful and I did so through the character of the virgin-victim. Her drive is her need to not be a fey victim, but be a powerful wench instead (‘I’ve been miscast!’). This leads her to convince her would-be vampire attackers that not only can they transform her into a vampire instead of just sucking her dry, but they don’t need to be slaves to their head-vampire master – Elvis. But instead they… well, I won’t give any spoilers here. Just watch the film for yourself.

What I was playing with by making Marilyn and Judy vampires, was the idea of these female stars as both addicts and popular, extraordinary performers whose legendary appeal has survived through decades of changing fashions and cultural transformations. They are addicted to pills and booze when mortal, then to blood when ‘dead’. But through mortality and death the thing that they’re most addicted to is the spotlight. Glamour, attention, an audience… it’s all the same thing to these ladies. Once they accept and control their blood-lust, they can channel that addictive energy and finally concentrate on their careers. And isn’t that a showbiz tale as old as time?

So that’s the plot and the drive of the film. What about my Judy and Marilyn? Considering our fascination with star biography, the artifice of stardom and the ‘real’ person behind it, I took them back to their original names and my characters became Frances and Norma. I searched for lookalikes at first but that became less important as the casting progressed. Because the whole thing embraces a schlock and trash aesthetic, I wasn’t really that bothered about ‘good’ imitations of the stars themselves. Or even good acting. Which was just as well.

Although the Dorothy gingham pinafore and Marilyn’s Seven Year Itch halter dress are obvious, I wanted it to be clear who they were, so chose these famous outfits as their main costumes. They also symbolise that Frances and Norma have been clinging on to their iconic past and public personae. They’ve been wearing them since they died, so they are raggedy and gross and blood-stained. A bit like the real things, doing the museum rounds.

Not everyone gets Rainbow Kiss. Those that don’t, oh well, never mind. Those that do, they really do. I’ve had some really negative and some really positive reactions to this film. And that for me has been the greatest compliment because Great Trash polarises and is a very particular taste. Like fresh blood to an addicted movie star.