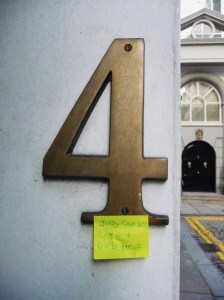 As keen followers of the For the Love of Judy project will know (all 3 of you, ehem), on the 27th February I visited 4 Cadogan Lane, SW1: the London home and last address of Judy Garland. It was a pilgrimage of sorts, a kind of official start of this project (a project that’s been brewing for years, mind you) and something of a necessity. I needed to see this house for many reasons – personal, artistic, full-blown superfandom. In lieu of a Blue Plaque (that won’t be put there now that project has run out of funding), I left a Post-it that said ‘Judy Garland lived and died here’. The placing of the Post-it was a spontaneous act. I’d spent quite a bit of time at the house and was about to go. Leaving was quite difficult, actually. I felt it needed a marker but I guess, thinking about it now, I needed to make my mark. I’d been there and it was significant to me and significant for this project. I also wanted to let people know the significance of the house that looks so insignificant. That said, I didn’t expect that Post-it to last the day. I certainly didn’t expect it to last two months.

On the 18th April, Stuart M contacted me through Twitter to say that he’d visited the house. He’d Googled it and told me that the first thing that came up was my article in Civilian. Thus he knew about the Post-it and thus when he visited and found it was still there he photographed it to show me. A gorgeous, ghostly photo. TOUCHED.

Then today, 25th April, I was alerted to a video by Paul Walsh of his visit to Cadogan Lane. I was so excited to see it and a little worried… what if it was gone now? What if… what if… and there it was! At the end of the minute long film: my little weathered, curling Post-it stuck to the number four. STUNNED.